We are announcing the latest release of SFTPPlus version 3.48.0.

We are announcing the latest release of SFTPPlus version 3.47.0.

The electronic data interchange (EDI) of the Department for Work and Pensions (DWP) in the United Kingdom can be done via the Generic File Transfer Service (GFTS) gateway.

This article is aimed at companies which need to exchange files and data with the DWP.

For example, as an housing association you will exchange documents with the DWP Housing to manage the Universal Credit payments and deductions.

These entities are referred by DWP as creditor server or endpoint FTPS server.

The GFTS options is not available to Local Authorities or Local Councils. E-Transfer system should be used instead.

In practice, this means that as a partner to DWP you will have to set up and host an Explicit FTPS server. DWP is operating an FTPS client and actively pushes data to you.

Electronic data interchange (EDI) is the concept of electronically communicating information that was traditionally communicated on paper, such as purchase orders and invoices.

With SFTPPlus you can use a certificate generated by any certificate authority (public or your private CA).

On top of the security provided by the TLS/SSL layer, username/password credentials are used to identify the requests from DWP.

SFTPPlus can support a multi-channel architecture, allowing you to use the same SFTPPlus server for exchanging files with multiple partners, not only with DWP.

Read more about securing FTPS server with SFTPPlus in our dedicated documentation page.

The client is the active component which controls when and what type of file transfer operation to perform. The client generates an authenticated connection to the server and asks the server to push or pull files. DWP will act as a client.

The server is the reactive component which controls who can perform file transfer operations and what kind of file operations are allowed. The server stays idle and only becomes active once it receives a connection from the client. Your system will act as a server.

Once the data is pushed by DWP, it will reside as files on your system. From there it will be further processed and consumed by your business system.

We can help you understand the Code of Connection (CoCo) document and make sure the people from your organization will understand the requirements and security measurements.

We are involved in the delivery and maintenance of the Digital Children’s Platform (DOS 012) and the data exchange between DWP and the Scottish Government.

We offer broad expertise into the data exchange with DWP and DVLA. Our customers benefit of help and consultancy for their DWP and DVLA related projects without any additional cost.

We are announcing the latest release of SFTPPlus version 3.46.0.

When closely investigating managed file transfers, pushing a file to a remote FTP server turns out to be just a phase in a series of interlinked processes.

Once the file arrives on the FTPS server, it is read and further processed. The next step might involve downloading the file or copying it to another processing area.

When uploading a large file, copying or pulling it before completing the transfer can result in corrupted file data. For example, a pull operation might start before the file is fully uploaded, with only a fragment of the original file available for download.

Another common case in which data corruption may happen is when a partial upload occurs because of connection failures during transfer. A client starts sending a file to the server, but at some point connection is lost. Maybe the client VM was powered off unexpectedly or the network became temporarily unavailable for too long. This will result in a partial file being left on the server, which can be accidentally processed by the next stage in our process.

This is a serious issue with FTP and FTPS connections. FTP protocols do not mandate sending the total file size before an upload. Furthermore, they do not make use of an explicit end-of-file marker. An FTP client signals the completion of an upload by simply closing the data connection.

To mitigate this problem, a file locking mechanism can be implemented by uploading files using temporary names and then renaming them back to their initial names once all the data was pushed by the client.

Clients like WinSCP will use temporary names formed by appending a non-configurable .filepart extension to the initial file names.

In SFTPPlus you can configure a file transfer to use any suffix / extension during the upload, you are not restricted to the .filepart one. . For example, you can use the .tmp or .incomplete extensions. 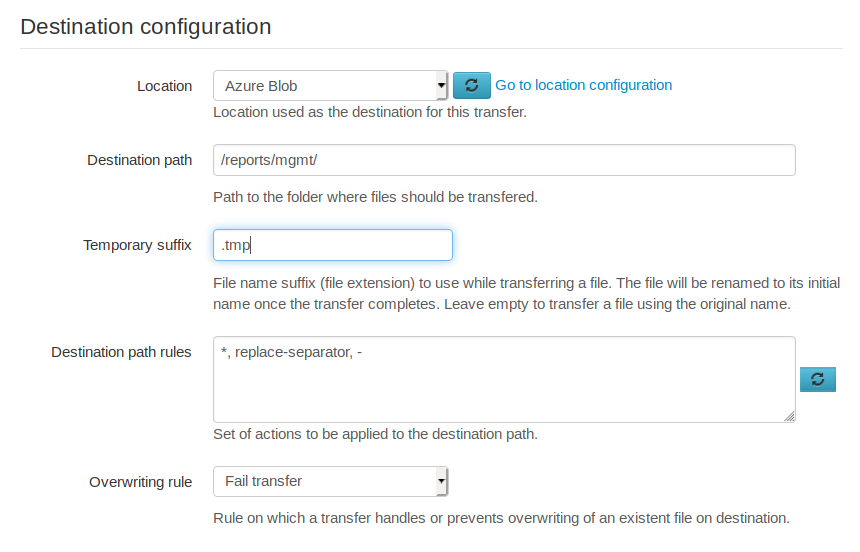 On most file systems the rename operation is atomic and very fast.

The same technique can be used to lock a file while uploading through SFTP transfers.

The SCP protocol does not provide a rename operation, but the total file size is advertised in the SCP upload request, which happens before the client starts pushing the content of the file.

Read more about transferring files with temporary names in our documentation page.